In 1932, in the aftermath of the Wall Street Crash, Ferdinand Porsche found himself unemployed having been laid off by Steyer where he worked as Technical Director.

Not willing to compromise, Porsche insisted that any new employer should also provide him with a seat on the Board of Directors. After he was unable to find a suitable position, he decided to launch his own company. Anxious not to let money troubles get in the way of his aspirations, he launched Hochleistungs Motor GmbH (High Efficiency Engines Ltd) and began work on a brand new racing engine.

Around the same time, struggling manufacturers Audi, DKW, Horch and Wanderer were in the process of joining forces to form Auto Union. The Chairman of the Board of Directors, Baron Klaus von Oertzen felt that a showpiece project was needed to bring fame to this new company – a racing car. Porsche had previously done some work for Wanderer and was commissioned to design the car. Motor racing drive Hans Stuck had been successful with Mercedes-Benz, and was acquainted with Adolf Hitler having met him on a hunting trip in 1925. Between Porsche, Baron Klaus von Oertzen and Hans Stuck, they had the formula to create a world beating race car, they just needed the finance.

During a turbulent 1933 in German, the Nazi party came to power. In February of that year, Hitler attended the Berlin Motor Show, where he promised to boost the German car industry with the announcement of tax benefits for car owners, a major road construction programme and state-funded motorsport events.

Porsche, Baron Klaus von Oertzen and Hans Stuck went to meet with Hitler. As part of his plans to grow the German motor industry, Hitler had already pledged 500,000 Reichmarks to Mercedes but Porsche was able to convince him to split the money between Mercedes and the newly formed Auto Union. Hitler also agreed to award £40,000 (around £2.5m today) to the company that built the best racing car of 1934. Porsche’s Hochleistungs Motor GmbH (High Efficiency Engines Ltd) was brought into the fold and the Auto Union team got to work. Mercedes-Benz were most unhappy with Porsche’s intervention and a great rivalry began.

So how does this short history lesson bring us to the Maserati 6CM?

By the mid-1930s the German cars were dominating the Grand Prix circuit so Maserati decided to concentrate on the Voiturette one-liter class with the 4CM. Alfa Romeo had come to the same realisation, and at the same time the first English Racing Automobiles (ERA) cars appeared. With the renewed challenge from Alfa Romeo and ERA the 4 cylinder 4CM proved uncompetitive, so the 6 cylinder 6CM arrived. 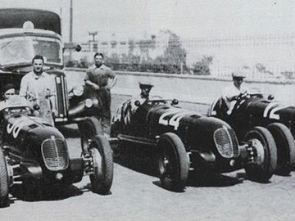 The 6CM quickly proved itself on the race track, having strong seasons in 1936, 1937 and 1938 thanks to the supercharged six-cylinder in-line engine which produced around 155bhp. It weighed just 650kg giving a top speed of around 140mph. Just 28 examples were produced, and of these 28, one car was driven by well known Italian racing driver Carlo Felice “Didi” Trossi

For the 1937 season Count Trossi had moved from the Maserati team to Alfa Romeo, although interestingly on 25 April 1937 took first place at Posillipo Park in the Voiturette 1500cc driving a Maserati 6CM…

Count Trossi was an Anglophile Italian aristocrat from a banking family and had a passion for going fast, whether on the water, in the air or on the race track. Throughout his career he would race for three different teams: Mercedes-Benz, Alfa Romeo and, briefly in 1936, Maserati. He would go on to win the 1947 Italian Grand Prix and the 1948 Swiss Grand Prix with Alfa Romeo.

For the 1936 season Count Trossi championed a Masaerati 6CM, taking 1st place at the Nürburgring on 14th June, Milan on 28th June, Livorno on August 2nd, Lucca on 7th September and the sweetest of all, Modena on 21st September. He also placed 2nd at Pescara on 15th August.

For the 1938 season, when the works drivers introduced the updated 4CL, 1532 passed from the factory team to Edwardo Teagno, a wealthy privateer driver. On 30th May 1937 Edwardo Teagno took 3rd place at the Internationales Avus Rennen driving a Maserati 6CM, although we can only speculate whether that was chassis 1532. Teagno continued to compete in a Maserati 6CM through to the 1939 season, posting 9th place at Mellaha Lake on 7th May 1939.

Like many Maserati Grand Prix cars 1532 found it’s way to South America, returning to the UK in the 1960s. The car has since been restored to it’s former glory and appeared at various historic race meetings including the Chateau Impney Hill Climb,

We certainly hope we’ll see it at historic race meetings over the next few years.

1 thought on “What is the Maserati 6CM, why was Hitler involved and how much are they worth today?”