You may recall back in summer 2015 we sold a red BMW E30 Convertible.

Well, we got the bug for these cool little cars, so here’s another one:

Laguna Green with all Black Leather

This car came to me as a project. The roof had long since expired, and in three nights of terrible rain the roof gave way completely, leaving me with swimming pools in the front and rear footwells.

Thankfully the seats are leather and I’d been treating them with a high quality balsam so they were unaffected!

When I removed the seats to assess the rain damage, it became obvious that the carpet was simply too waterlogged to salvage. I removed all of the interior carpet to assess, and was both relieved and surprised to find NO ROT OR RUST beneath it. This means that the roof leak was not a regular occurrence! After drying out all of the footwells, I cleaned them up then treated the paint with black, anti-rust metal paint before having a professional trimmer (Tim the trim) re-fit new carpet to the car. With a fresh set of tailored mats, the inside was complete.

A new roof was ordered from the USA, which Tim the trim fitted after removing the old, expired roof. This new roof is a very high quality item, easily as good as any of the German ones. It’s a mohair hood, so if you do buy the car, please, please never use any shampoo on it! Just water is fine… Tim the Trim says you can expect 10 years out of a roof so long as it’s looked after, 6-7 if not. He also said it needs a bit of time to be ‘weathered’, which is why in some of the photos it looks saggy at the rear of the car… It’s not, it’ll settle. Photos were taken just days after the roof was fitted and the car hadn’t seen anything other than the inside of my storage unit until then, so a few days of rain and a bit of sunshine will sort it right out.

There is no rust on the car, all of the arches are in fine condition, which is rare for cars of this age, especially the E30 which is prone to rust.

The paintwork on the car is very good indeed.

The car came to me as a non runner with an immobiliser issue. I had a mechanic check the car over and spent £260 on a full service. It now drives as it should, idles fine, runs at normal temperature for the engine and is generally a pleasant little motor all round. Doesn’t use any oil or coolant, doesn’t drip any oil.

I’ve worked hard to get this little car back up to standard. The only faults are as follows:

– There’s only 1 key
– Very few documents came with the car, the service history was missing when the car came to me and I had to send off for a V5, which is now in my name.
– The car is listed as an insurance write off back in 2012. This is understandable because values of these were low 3 years ago, so any minor damage would result in a write off. It has been repaired to a very high standard and really shouldn’t be a concern to the new owner, any check is welcome.
– The wiring could do with checking, the central locking will work using the boot (?!) but not the doors, although the central locking works fine this way, but you might get bored of walking around to the boot every time! I suspect this is due to someone fitting an aftermarket alarm at some point in the cars life.

Overall, a very usable classic car that’s not going to lose you any money, prices are only going one way!

This is the second E30 I’ve come across, if you’ve been looking for one of these for a while you may have seen the red one with ‘coke bottle’ wheels which sold back in July for £3100.

Personally, although this car doesn’t have much in the way of history, I think it’s a better car, so I’ve priced it accordingly and am open to offers. 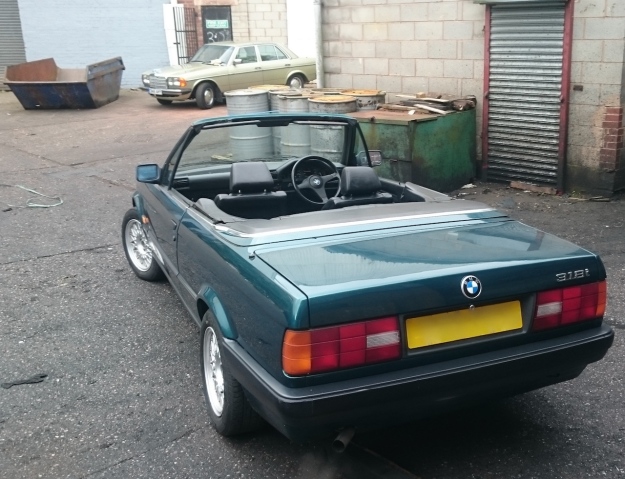 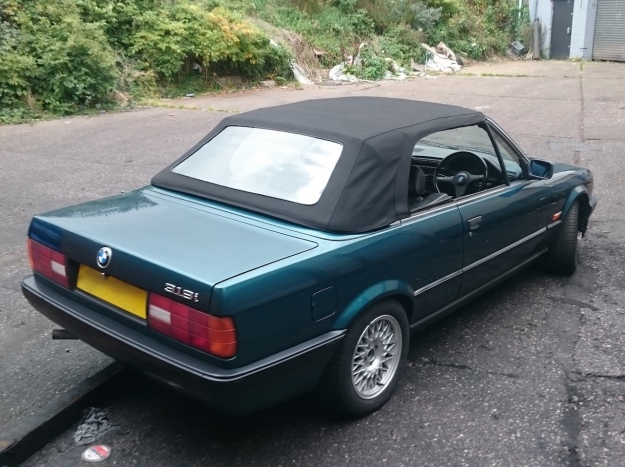 Before the carpet went in – No rust, no rot, just solid floors and anti rust black paint

Not an Audi, as mentioned previously.

The evening started pleasantly enough, we took the TT over to Stourport, ambled around, ate chips, strolled by the river. Standard stuff. Luckily my passenger enjoyed the heavy use of the loud pedal so the journey back was spritely…

At a set of traffic lights on the journey home, there it was…

The road stretched ahead of us as we sat and watched vehicles join us from the left, waiting our turn to continue onward. Sneaking through the lights at the last moment, we saw it. The lights went green for us and naturally we gave chase. The TT caught up and the four rings of the Audi badge almost kissed the Turbo insignia below the spoiler of the 2007 911. Dark blue, with dark wheels, we both floored it up the hill to the roundabout; he took the right hand lane and us the left, cheekily accelerating around him on the outside as we joined the dual carriageway. We hadn’t intended to overtake, we’d expected him to turn right towards the motorway, but at the last moment he snuck in behind us, following us down the dual carriageway.

With the TT now ahead, the 911’s headlights filled the rear view mirror – he must have been a hairs breadth from our license plate. We politely moved into the left hand lane, as if some imaginary race steward was frantically waving a blue flag in our direction. The Porsche pulled alongside to overtake and at that moment the planets aligned.

The traffic lights ahead turned red.

Both cars rolled to a stop, staring at a full half mile of uphill, empty dual carriageway.

Pulse racing from the TT’s cheeky, unintentional overtaking manouvre at the roundabout; I hit the switch and lowered the electric window. Everything happened in slow motion. I looked over at the Porsche driver with the biggest grin on my face, and he looked back at me, beaming in agreement. There was no malice between us, no aggression, no disrespect – just a love for the vehicles in which we sat and a joyful acknowledgement of the situation that was unfolding.

We both knew what was about to happen.

We both knew it was ON.

The lights went Orange, and then Green…

The 911 paused for a slit second and I let the clutch out as fast as I dare whilst nailing the throttle – the TT launched, all four wheels clamouring for grip as we bounced off the rev limiter through first and second… The noise from both vehicles was incredible.

We hadn’t made it to third gear before the Porsche rocketed past us.

The roar of the boxer engine and the wail of its turbo filled the TT as the Porsche bellowed up the hill. With the TT still going through the gears at pace the Porsche was gone, at unbelievable velocity the taillights disappeared up the hill and across the roundabout. Despite our best efforts to use the cornering abilities of the TT, by the time we’d crossed the roundabout and hit the second straight of the dual carriageway the Porsche was long gone.

The 225bhp of the TT was no match for the 400bhp produced by the Porsche’s mighty 3.6 litre unit. It wasn’t a massacre, we put up a fight, but the TT was shown its place in the pecking order, given a good solid trouncing by its German cousin.

The TT was still accelerating in fifth gear when my thoughts turned to last weeks ‘Your dream Porsche is an Audi blog’. I turned to my passenger, (who hadn’t read the blog) laughed to myself, and explained the irony of the situation.

Everything had changed in less than a minute.

Motoring is about passion, it’s an insatiable desire, its about design, engineering, and that little extra something… you can’t quantify the experience of nights like tonight, there is no star rating system to dictate how much a car will make your pulse race. 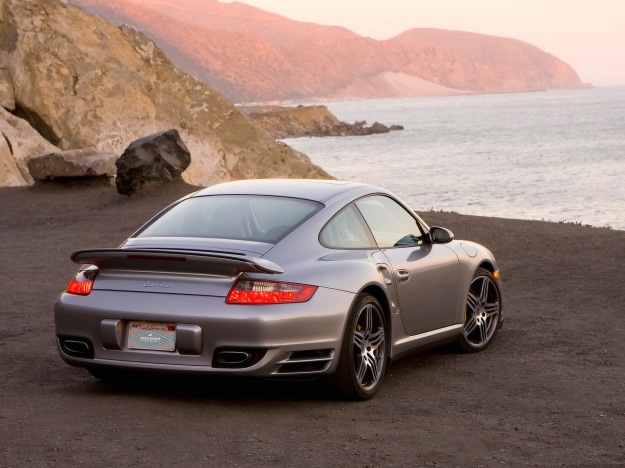 The team at InMotionMedia have been busy working with The SL Shop on some movies for the latest incarnation of the SL Shop website… And it’s about as stylish as classic car content gets.

The SL Shop are Europe’s leading Classic Mercedes-Benz Specialist, and are well known for turning out impeccable examples of the 107 SL.

Shot in the wonderful countryside not far from SL Shop’s Redditch base, the video will have you scrabbling over your keyboard to check the going rate on 1980s Mercedes convertibles…

Below are a few of our favourite scenes from this lovely edit – scroll down to watch the full 3 minute video.

And with that, we’re off to convince the bank manager that a classic German super-cabriolet with a 5.0 V8 engine is a worthy cause for a bank loan.

(All photos reproduced with permission) 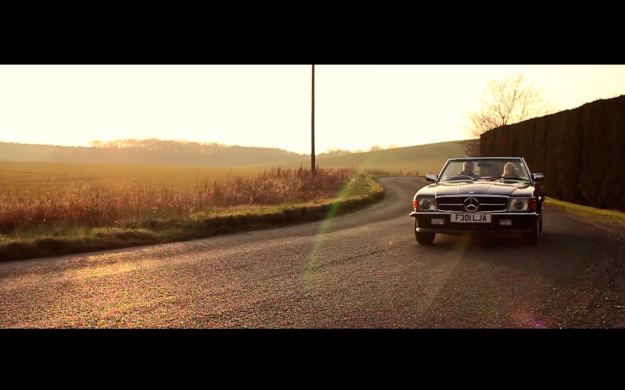 is the short answer to the question, but there are provisos…

Although surf racks are available for the boot lid, it may not be possible with models such as the Trophy and Freestyle, which have a boot lid spoiler.

You can fit a surfboard in an MGF, but not a longboard

You can fit a surfboard up to around 6’2 in a small convertible, with the fins and tail as far into the footwell as possible and the nose pointing towards the rear of the car.

With boards over 6’2 you may need to remove the passenger seat headrest. In the MGF this causes zero problems with the roof going up and down, although with boards over 6’2 just be careful not to scrape the rear screen with the nose of the board when you’re putting the roof up or down.

The MGF complete with 6’2 surfboard enjoying the sunshine late in the season at Polzeath beach, UK

Pictured is a 6’0 surfboard inside an MGF Freestlye without removing the headrest. There is enough space in the boot for your changing mat, towel and wetsuit, so there you have it, you can own a convertible and still go surfing!

The MGF Freestyle on Polzeath Beach, complete with surfboard on the passenger seat